Now that Ramadan is way over, it is time to have the talk about the prank shows spree. I honestly don’t know what prank shows have to do with the holy month?! Back in the days it was the Fawazeer and ALF Leila that marked Ramadan. But suddenly the prank shows stepped in and took over.

Truth is, I never believed that the people didn’t know it was a prank. I’ve had a couple of experiments with series and shows as a kid, and I know that a lot of equipment are involved in filming. Sound and light, mistakes and retakes, aside from cameras of course. Which could be easily hidden nowadays, but was really hard to hide back then. But it was fine, because I used to think that even if people acted it out, the pranks were harmless and funny, and it gave people a good laugh.

Then the shows evolved a bit, and instead of performing the prank on normal people, they started making prank shows for actors and stars, ever since Hussein Al –Imam and Madiha Hatem (Badreya Tolba). And it was also hard to believe that the stars didn’t know it was a prank, being in the industry and all. But still, it was bearable so I thought that it’s fine. It’s another business for the stars who definitely don’t need it, and let people enjoy the laugh.

But in the recent years, things suddenly developed seriously, instead of one prank show a year we now have 2, 3 and 4. And instead of the funny and light pranks they became annoying, dangerous and humiliating. So they now make low budget prank shows for regular citizens, and tailor made pranks for actors, football players and media stars. With large production budgets that sometimes overcomes the Series, from sophisticated equipment and latest technology to traveling budget and international makeup artists. Apart from a number of stars and actors that take a fortune to accept to appear in the shows that mask the prank.

As for the pranks themselves, they went from funny or awkward situations to a never-ending series of humiliation. The star, regardless of his age, stature or prestige, becomes an object for mockery, apathy, and disdain. As if the producers of these shows have suddenly realized that all people want is to see their favorite stars wet, messy and screaming, or see their favorite actress looking scared with messy make up. Let alone the numerous cursing that gets censored, while it could’ve been edited and removed, as if they mean to tell us that these bright, shiny and classy stars are not any better than savage people in fights. But what’s really weird is that instead of people shaming the stars for cursing, they try to guess what the insult was, as if they rejoice that they’re no better. such a weird thing.

What’s even more weird is that such shows lasted all these years, and increased, despite all the criticism and the lawsuits.

And because things evolve, the normal evolve after demeaning, humiliating and scaring the stars was bullying them. Starting from the way they are dressed and their hair, the way they walk and talk, and then their social state or their problems and conditions: how many times they were married, flirty or not, who do they have problems with…why not? People love to gossip, and it’s all for the views. As if the star has suddenly turned to the monkey, whose owner would tie him to his hand, gather people around him then make him dance and collect the money, while people laugh at him, and pay money to the one who tortures him. The same people who pay money to see the monkey suffering are the ones who run to the TV to catch the prank show.

What’s really puzzling is the star who agrees to appear on such shows, and accept to be demeaned, humiliated and be at their worst, no matter what the gain is. Because aside from their prestige that gets ruined, and the people who normally lose their respect to them after they hear them cursing that way or see them accept all this humiliation for the sake of money while they are fully aware that they don’t need it. Apart from all of this, what about their children hearing their parents get humiliated like that? How about their kids having to face their friends and colleagues who have also heard their parents get humiliated and bullied then laugh and say wait for us in Ramadan? How could they be able to stop their colleagues from bullying them or humiliating them with the same names that their parents were called in the show? Whatever the revenue is (which I really can’t believe it’s the money) it can’t be worth that these stars’ images get ruined in their kids’ eyes. We endure the troubles at work and the problems and pray to god to give us money in order not to be humiliated ever again. And sometimes we might quit despite our need other than accepting humiliation, and god will sure provide. This issue really needs to be studied by Psychologists and sociologists

What confuses me is why a channel as big as MBC and its history would adopt such shows which have reached three prank shows on one channel this year alone? One right before Iftar, one right after Iftar, and one a couple of hours later. And the three are of the same low, fabricated and bullying-based content. And this year violating animals was added to the list, which really lacks any sense of comedy. I really can’t understand how the management of such channel would approve such violations on animal rights! If the stars accept to be humiliated like that, the poor animals clearly don’t deserve to be thrown at, beaten and tortured like that, is that all so that people laugh? Well, no one’s laughing!

Unfortunately these shows are not any less dangerous than Mohamed Ramadan’s movies which people demand to stop as it affects the society. The danger doesn’t only lie in people watching an actor doing drugs and harassing people, or killing anyone who upsets them. The graver danger lies in them watching the actor bullying the stars, intimidating them and demeaning them, then they laugh as if it’s ok! What’s even more dangerous is that they watch their parents laughing and enjoying the bullying, and at the same time those same parents ask their kids to accept others and stop bullying. At the same time the country is embracing anti-bullying campaigns yet allows shows that encourage bullying and present it as a funny thing.

I think we need a serious action towards prank shows, which I think won’t end until a tragic accident happens that would force the supreme council for media regulations to stop these shows and incriminate them. And since prevention is better than the cure as they say, and before the tragic accident happen, I wish the producers would reconsider making these shows. If you’d like to gather the stars and wet them and mess them up, you can make competition shows like the old show tele match or like beat the stars, which when produced in Egypt was all about Al Sakka! May be because he missed making a series this year, and which profit goes to charity organizations which their ads are run during these prank shows that cost millions to produce!

Stories and Tales by Samia Tawfik
2291 0

“Why am I talking to myself holding a book and a cup of coffee and sitting there like a 70 years old...

10 Habits Will Damage Your Oily Skin

Fashion and Beauty by Jannah Yahya
74 0

10 Habits Will Damage Your Oily Skin: Oily skin is one of the most sensitive skin types since it is...

Tips for a healthier lifestyle : 1- Make your dishes healthier

We all want to eat healthier, make changes to our diet so that we can stay healthy and look good, 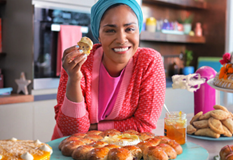 How Netflix Will Change Your Iftar Dishes

Cooking and Catering by Donia Tamer
1175 0

It’s one of the sweetest baking shows ever made. Nadiya Hussien, the Greatest Baking Show winner, am...